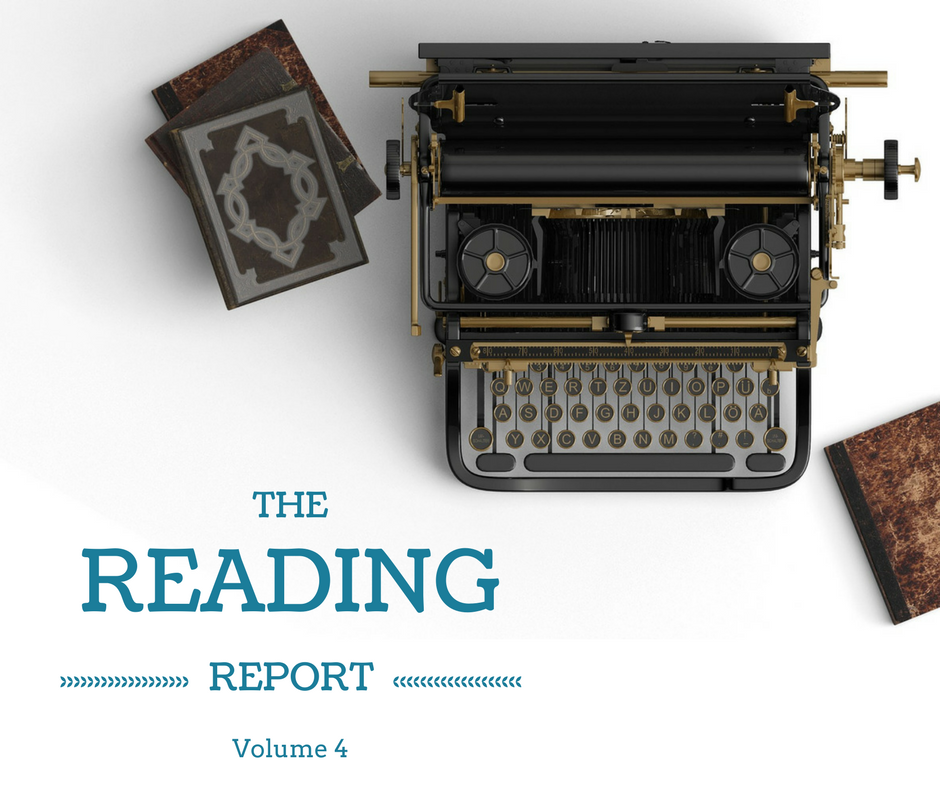 It is September already! That was fast! We have been so busy lately that I was not even always sure whether I was coming or going, so here's to a less chaotic rhythm now that autumn is on the way. Our family is getting ever closer to completing our move to Tennessee, and with lots of extra time on the road, as well as unpacking or cleaning at our rental house, my reading time dwindled a little. However, I have had some great audio books going, so I will be mentioning those in this edition along with my other reads!

I am just going to roll all my current and recently finished read into one big ol' lump here, ok? Would you believe that I got carried away and actually finished The Brothers Karamazov this past week? I knew once we reached a certain point in the story line that I would not be able to stop and wait until the next month to see what happened. So I just kept on going. I was surprised to find that by the end of the book, I really was sympathetic to all the brothers and was rooting for them each to make it through their various trials, both literal and figurative. Even though their faults were clearly portrayed, there was something in each brother that was so human that I could not help but feel for each one. And even the women in the story, for whom I originally had very little love, came to be better understood and appreciated by the end. Dostoyevsky does not paint one-dimensional characters. On the contrary, these men and women are complex and even extreme in their displays of love, loyalty, hate, jealousy, forgiveness and frailty. I was sad to come to the end of the book, especially since the end leaves the reader wondering what will happen to each brother next. Interestingly, although the book obviously stands well enough on its own, Dostoyevsky did have plans to write a sequel, but he did not accomplish this before his death. Now, the big question is, as usual, what should I read next? I don't think it will be another Russian novel just yet, but reading The Brothers Karamazov certainly has given me courage to tackle another one soon!

In the nonfiction genre, the only book I am actively reading right now is Come With Me by Suzanne Eller. This has become my devotional reading in the mornings, and it is SO good! Eller walks us through each chapter by focussing on a different disciple, all pointing us to different ways in which Jesus calls us and different challenges we face in following Him, as well as the rich blessings we gain when we do. She has study and reflection questions at the end of each chapter, which have been great prompts in my quiet time. And now she is also coming out with a devotional book under the same title! It sounds amazing! I would highly recommend either (or both!) of these inspiring books for help in growing your Christian walk.

On audio, my personal listening choice has been Louisa May Alcott's Little Women, which I am listening to via Penguin's audiobook app, Volumes. If I ever read this book for myself, which I am not sure I did, it was when I was pretty young. I only remember the 1990s film version with Christian Bale and Wynona Rider. So, no big surprise, but I really think the book is better. And the added bonus is that although a lot of it is going over his head, when my 6 year old son is in the room, he likes listening along. I am pretty sure I am going to get the Audible version of Little Men (via Whispersync) to listen to when this is done!

We have also been making good use of audio books in the car on the trips between Illinois and Tennessee. I got a couple of free Audible credits when I signed up for a trial, and we got J. M. Barry's Peter Pan, read by Jim Dale and Laura Ingalls Wilder's The Little House in the Big Woods read by Cherry Jones. Both were big hits with everyone! I had tried a few times to read Peter Pan aloud since it was one of our free reads for AmblesideOnline Year One, but I just could not get into it. I wanted to love it, but I just could not read it. Turns out having a proper Brit reading this very British book makes all the difference in the world! As for The Little House in the Big Woods, Cherry Jones was a great reader, and I could definitely listen to this one again and again! I never read The Little House series as a girl (travesty of travesties, I know, but it is the truth!) so I am going to really enjoy getting to read (or hear) all of them with my kids! The one little problem I had was Cherry Jones' singing. Sorry, but I wish they had either had an actual man do the singing voice overs for those parts, or just had her read the text in rhythm. She just was enough off in her intonation to grate on my ears. The woes of being musically trained. . . Regardless, I would be happy to own the whole series on audio, just because they are fun to listen to as a family!

Honestly, I don't know! I need a new novel to read, but I am not sure what direction to go in. I think it needs to be something a little light. I just got the whole collection of L. M. Montgomery's "Anne" books for Kindle last month, so I might dive into one of those. I listened to all of Anne of Green Gables and about half of Anne of Avonlea on Librivox sometime in the last 12 months, so I might pick up where I left off with that series. But I also got a collection of Jane Austen books for the Kindle, as well, so I could go in that direction as well. Or, I might crack open one of the children's classics I just unpacked at the rental house and do a little screen-free reading instead! Rebecca of Sunnybrook Farm has been calling to me for a while now. What say you? Do you cast your vote for Anne, Jane or Rebecca?