Before I get into my thoughts on A Room with a View, I need to apologize to those of you who subscribe to posts via email. The post I published yesterday had a major formatting problem when it transferred to email, and none of the books I was trying to share with you were visible. I’m so sorry for that inconvenience. If you click over to the actual blog website, you can see all the titles and links there, but I should really have been more careful about checking that everything was going to work before hitting publish. Now on to the review…

I fell in love with E. M. Forster’s lovely prose last year when reading Howards End along with the Close Reads Podcast. When I saw a book containing two other of his works at a library sale last year, I snatched it right up. Ever since then I had been waiting for the right time to dive into A Room with a View, and when I saw the Classic (movie) Adaptation category for the Back to the Classics Challenge, I decided this would be my chance. (I also added it to my Literary Fiction list for the Scholé Sisters 5×5 Challenge.)

A Room with a View opens on young Lucy Honeychurch and her middle-aged cousin Charlotte Bartlett staying in a pension in Florence, Italy. It is quite obvious from the beginning that Lucy is not very self-aware, and the main thread through the book follows her journey to knowing her own mind and heart.

Forster is, like Jane Austen, a master of the novel of manners, and he shows the ways that societal conventions were shifting in Edwardian times, while also painting engaging characters, a satisfying romantic plot and breathtaking views of both Italy and England. He balanced the tension in the relationships with just the right amount of satire and humor, as well. Although not everyone in the story gets what they want in the end, I was pleased that Lucy not only becomes self-aware but also gets her happy ending. I also enjoyed the way Forster wraps up the story back where it all began.

The big question now that I have finished reading the book is this—will I watch one of the film adaptations? I am as yet undecided. If I do, it will probably be the BBC version done in 2007. I tend to like BBC adaptations better than Hollywood productions. The truth is, though, if I do watch the movie at all, it will probably not be for a while because I don’t want to ruin the pictures I have in my mind from the beauty of the book just yet. I am definitely one of those people who rarely likes the film more than the book, at least when I’ve read before I’ve watched. What about you? Do you like to watch film adaptations of books you love? Do tell…

Charles Dickens’ A Tale of Two Cities was the book I chose for the Back to the Classics Challenge “Abandoned Classic” category. I considered plugging in George Eliot’s Middlemarch here because it is another classic I tried to read and gave up on before I had made much progress. Since I was already planning to read Silas Marner for another category, however, I didn’t feel like I needed two Eliot novels on my list.

A couple of years ago, three perhaps, I had started listening to a Penguin audio version of A Tale of Two Cities. I am not sure if it was simply that I didn’t have the brain power at the time (we were in a stressful life season, and I was still nursing our daughter), or if it was also that the narrator was not great, but I simply could not get into the storyline. I generally had a grasp of the plot, but I only got as far as the trial of Charles Darnay at Bailey’s before I just couldn’t go on and gave up on the book entirely.

This time around, I had a print copy, but I also decided to try listening to different audio version, this time on Librivox. I have to give kudos to reader Paul Adams for his excellent performance. His narration brought out both the drama and the humor of Dickens’ masterful tale. I was especially surprised by the humorous passages and Dickens’ satirical voice in A Tale of Two Cities. I have to admit that aside from being very familiar with A Christmas Carol, I had not read any other Dickens in its entirety up until now. The length of his books generally intimidates me for some reason, as well as the gloom of the Victorian era world he creates. Of course, A Tale of Two Cities is set during the French Revolution, making it even more violent and dark. This aspect of the novel made portions of it hard reading, but Dickens has such a way with words that even the ugliest parts of the story are poetic and compelling to read.

A Tale of Two Cities is at its core a human story, a story of people at their very best and their very worst, a story of humanity’s struggle to find a higher meaning amidst the bitterness of a sin-cursed world. It is a beautiful, redemptive story. Dickens weaves the plot and characters together in a somewhat surprising and masterful way that brings his tale to a truly satisfying end. Perhaps most unexpected twist of all was the fact that I was actually brought to tears at the last, something I never would have thought possible when reading a Victorian novel. But now that I have read and greatly appreciated the work of Mr. Dickens, you can be sure I will be back for more! The top three Dickens novels I want to read next are David Copperfield, Bleak House and Great Expectations, with Little Dorrit right up there, too!

In the meantime, however, I must move on to something else from my challenge lists. Most of what I’m reading right now is either AmblesideOnline Year 4 pre-reads or non-fiction, so I definitely need to add some fun fiction just for me in there! I think it will be A Room with a View because for quite some time I have been eyeing this E. M. Forster trilogy that is sitting on my shelves, just waiting for the perfect moment to jump in!

That’s all for now. I will be back soon with another review because my son and I are almost finished reading By the Shores of Silver Lake together. Until then, I’d love for you to pop into the comments and tell me what you are reading! 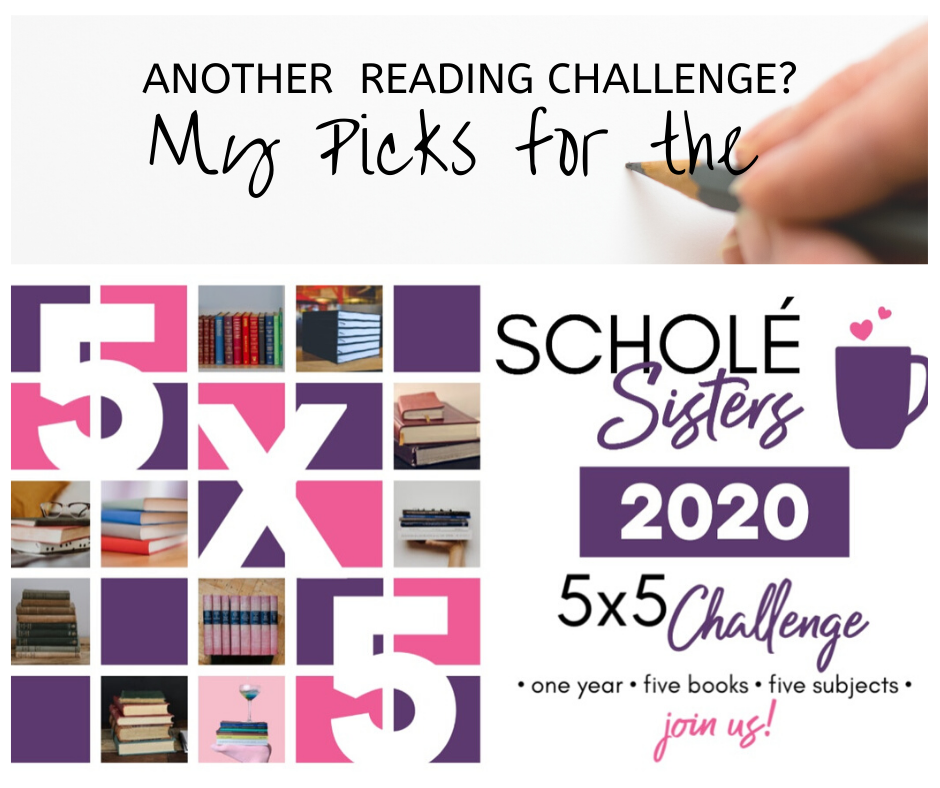 Call me crazy, but I have one more reading challenge to share with you for this year! The Scholé Sisters created the “5×5 Challenge” for 2020, and I decided to give it a go in addition to the Back to the Classics and 20 for 2020 Reading Challenges. The goal of the 5×5 list is to read both widely and deeply, so you choose 5 different topics/genres and 5 books in each of those areas. I am not quite as positive about completing this one as it is a bit more of a stretch due to the topics I chose. But I think even if I don’t finish all the titles, I will have made some good progress in self-education that I have been neglecting. Another part of the Scholé Sisters’ 5×5 Challenge is to read from your shelves or to reread books. So, I’ve noted with an asterisk which titles I have on my physical shelves or on Kindle. The only re-read is Til We Have Faces! Here are my choices so far:

Yes, I still have a few blanks to fill in. I plan to fill those in with books referenced in the other texts in those areas. Or I may find some titles via Goodreads or someone else’s recommendation in the Scholé Sisters membership discussions. I guess we will just see where the spirit leads! Also, I’m curious…if you were to choose 5 topic areas from which to read in the coming year, what would they be? I’d love to get your responses in the comments! 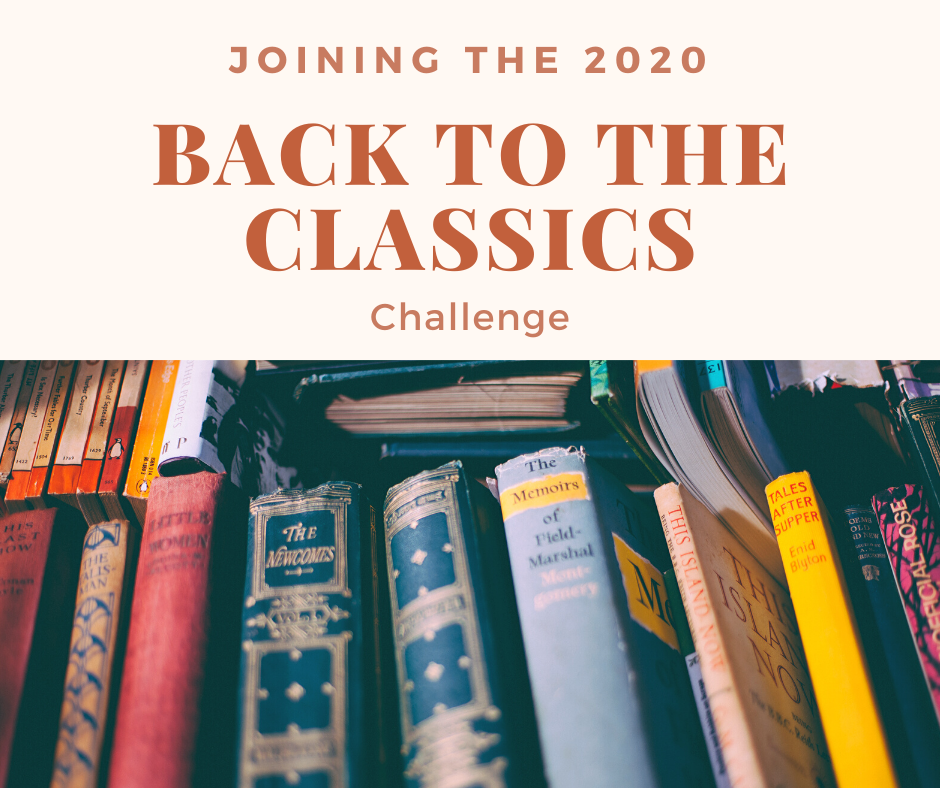 Hello again, dear readers! I’m back with another post about yet another book challenge! Am I in need of an intervention? Haha, maybe! But I don’t care. Bring on the books!

Last year I didn’t participate in the Back to the Classics Challenge hosted by Karen at Books and Chocolate like I had in 2018. This year I wasn’t even sure if she was going to host again. It certainly must be a great deal of work to follow up on all the entries at the end of the year. But I checked, and sure enough, she is back at it again! This year’s categories looked like they would fit nicely with the other challenges I am doing. So I decided to dive in! Here are my choices. (You may notice some overlap from my 20 for 2020 challenge list, and that was entirely intentional!)

Back to the Classics

Last year my reading was all over the place, and sometimes I felt like it was just too scattered for my liking. So having a few reading lists to keep me on track has already been really helpful. Of course, with the Back to the Classics Challenge the other part of the challenge is to keep up with writing the reviews! So I will have to actually come here and write now and then as I finish each book. I sure hope I can keep that going, too! Until next time…

The lovely ladies on The Literary Life Podcast are hosting a reading challenge this year, and, of course, I had to join in! Yes, I joined partly because I love them (and work with them and got the list early), but mostly it was because the categories on this list are simply amazing! One of my other book goals this year is to read more from my shelves here at home. In light of that, I tried to plug in as many titles that I own as I could. But every category has one or more runners up that I might end up reading instead/also. All titles with an asterisk are books I own either in print or on Kindle.

Aren’t these categories great? I mean, this list could go in so many different directions. It has been fun to look at other people’s lists on Instagram and Facebook, at least in the rare moments I have allowed myself to scroll social media. Some of these areas will be more out of my usual reading pattern than others, especially poetry and essays. I decided the best way to tackle these two categories was to add a page of poetry and an essay a day to my afternoon reading time. Enjoying a cup of hot tea with Emily Dickinson and Sir Frances Bacon is, admittedly, a pretty great way to spend a few minutes each afternoon!

What, if any, reading challenges are you participating in this coming year? I’d love to hear all about it!