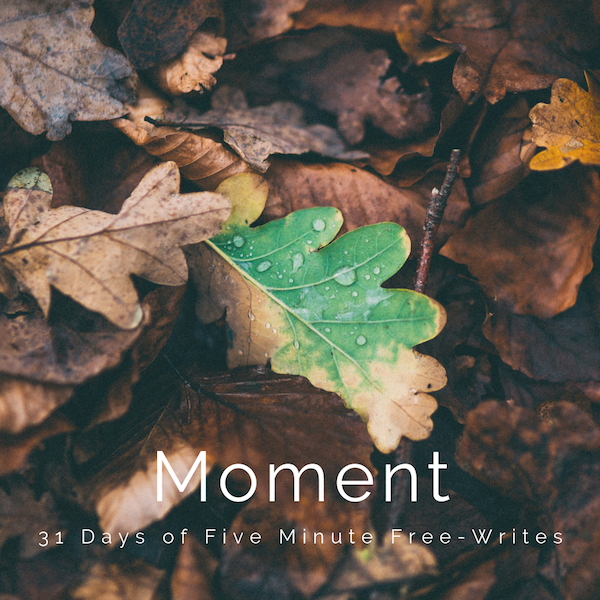 What am I thinking at this moment? I am thinking how behind I am in this challenge! This weekend was not good for writing. But it was good for making friends and spending time with family and creating memories.

At this moment I am thinking about how fast the years fly by. My son’s eighth birthday is coming this week, and I am wondering how many moments I have missed by being distracted by less important things.

This moment finds me tired, but happy, after a sweet time at our church’s fall bonfire. I enjoyed chatting with friends and watching my children play hide and seek in the dark with the other kids.

I am thankful in this moment for courage to try new things and to invite new people into my life. My first time hosting a book study group for homeschool moms went well, and I am looking forward to next month!

This moment in time is one we can never get back. I do not want to have regrets, do you? Let us be purposeful and follow God’s direction each day so that we live in a way that pleases Him and blesses those around us. 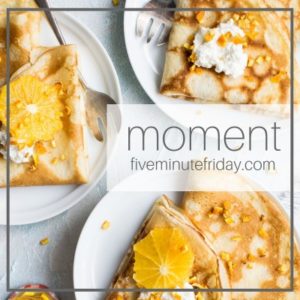 I am also linking up with the Five Minute Friday community today. To read more posts by bloggers on this prompt “moment” visit the link-up. 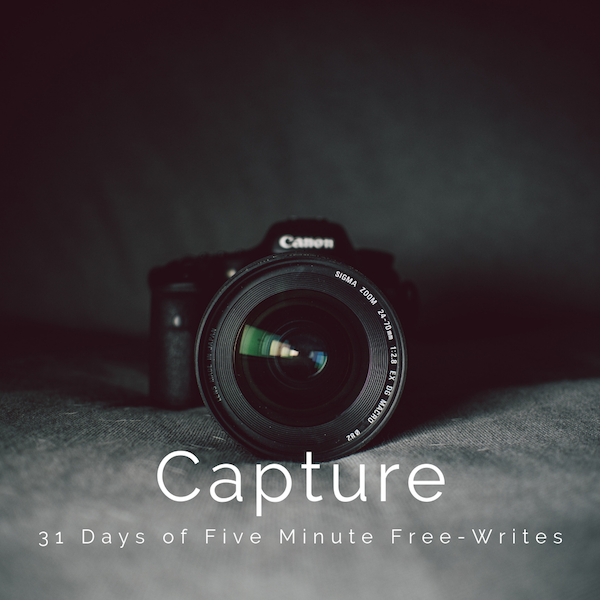 When I first saw this prompt, my mind went straight to the idea of capturing moments and memories, thus, the camera graphic. As I sit down to write tonight, however, I am more drawn to the verse below about taking every thought captive to obey Christ.

We destroy arguments and every lofty opinion raised against the knowledge of God, and take every thought captive to obey Christ.

My tendency is toward worry and anxiety and negative thought patterns. Over the past year in particular, life has changed in many ways, and I am on a journey to better mental and emotional health. This verse is a big part of my healing. I am learning how to stop the negative thoughts through prayer and surrendering to God.

And today I had to do that very thing, as I was nervous about a new book group I am starting and inviting to my home this weekend. I have been worried about what the ladies coming with think of our little rental house and how things will go meeting these people for the first time. New things are scary. But I was reminded to take that concern straight to the Lord. I know He has called me to do this at this time, so I can be confident that He is in it and will bless it.

I also was reminded by an old Elisabeth Elliot radio program today to do this same thing with forgiveness. She was talking about keeping a record of past hurts that people have inflicted on us. This verse came to mind as I considered how to fight the temptation to bring up those things with the people I love. I have to take those thoughts to Christ and remind myself that His blood covers all those sins, so I don’t need to hold onto them. Instead, I can choose to let them go and be free to love the people in my life with grace. May you do the same, as well! 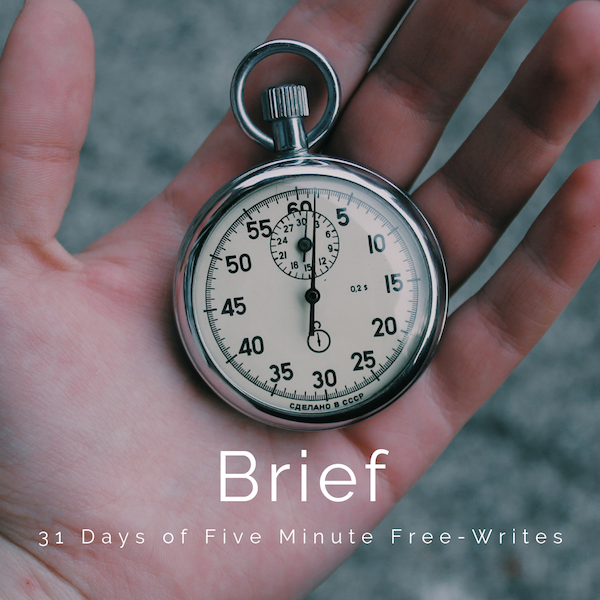 Yes, this post is going to be pretty brief! I am really just trying to catch up on this challenge because I have been a day behind all week. I needed a break so desperately again this weekend. I just couldn’t think of anything to write and had other online work that was on a deadline. So I just finished my post on commonplacing, which was long, and now I’m writing this one!

This challenge has been so good for me creatively, but in all honesty, it has been hard for me to come up with something new to write every day! It is a good thing it only lasts 31 days! I am proud of myself for mostly keeping up, though, and writing a post for every prompt. I admire those of you who routinely write daily. I know some do it because they just have to get the words inside of them out, but I am not at that place as a writer, at least not yet.

It’s a good thing I have had a 5 minute time limit on myself, too, because that helps me not feel overwhelmed that I have to write some long thesis. Just keep it brief. And don’t overthink it. That is good for me. We have just one week left in the challenge, and I think I’ll make it to the end! How about you? 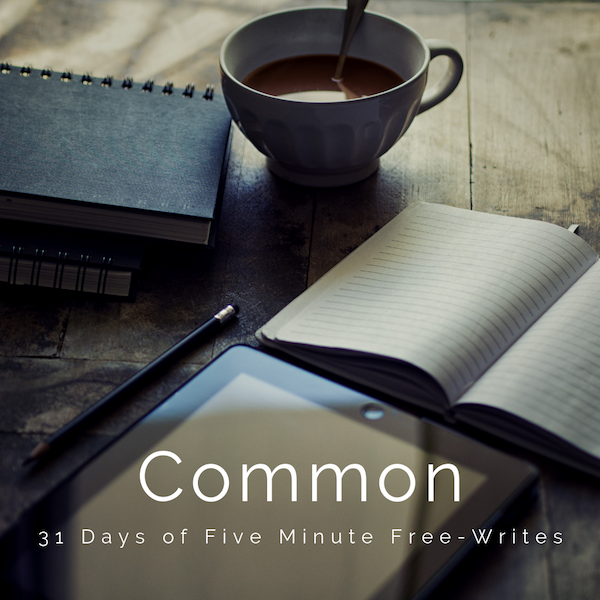 In the interest of honesty, I am not setting a timer for this post, and it will likely take me more than five minutes to write. But the word “common” prompted me to think of my somewhat neglected commonplace notebook…so I’m going to talk a little bit about “commonplacing” because I don’t think I have written about it here before. It fits within the themes of contemplation and creativity, too!

This week’s prompt brought to my mind my all too oft neglected commonplace book. I keep meaning to dig it out of the drawer next to my favorite reading spot and make a better habit of jotting things down in it. But I may be getting ahead of myself because I realize that some of you may have never heard of a commonplace book and don’t know what I’m talking about! Well, don’t feel too out of the loop. Until I started reading Charlotte Mason homeschool mom blogs a few years ago, I’d never heard the term before, either.

A commonplace book is, in its simplest form, a place in which you write down favorite quotes and passages as you read so that you can come back to them again later. You can google “commonplace book” and find all sorts of examples, but each person keeps their commonplace a little differently. I don’t use mine as much as I perhaps should, but when I do take the time to write quotes, poems, sayings or meaningful passages from books (or articles, or even blog posts), I find I remember them better later on. And I do enjoy flipping through the notebook and seeing them again, sort of like looking at snapshots of good times with old friends. (Because I do think of really excellent books as my friends, don’t you?)

The first examples of commonplace books I’ve read about are from medieval and renaissance scholars. They used them as a way to keep and organize ideas and facts as they studied, and looking at some of these artifacts is truly a peek into the mind of the great thinkers of that time period! I don’t have any such grand visions of my own commonplace as being anything so intriguing to generations to come, but perhaps some day my children might find them and enjoy reading what I found a comfort or an inspiration.

One little fact I found enlightening is the etymology of the word “commonplace” in reference to these keeping books. It made little sense to me that a word that now means ordinary or trite would be used to denote a place in which we record that which we find extraordinary and worth noting. But I discovered that the term originally was two words, “common place” and was translated from the Latin, locus communis, which was in itself a translation from the Greek words that meant “general theme.”

Now that made sense to me, since many people did and still do organize their commonplaces according to theme or subjects. But I think a good many more of us are less structured than that and just write down whatever strikes our fancy. I like the idea of my commonplace being a spot where all the books I read come out and play together! As I read through the many quotes I have gathered over the years, I am sometimes surpised at how much the science of relations is at work as I find connections between the various books and quotes I might not have seen otherwise.

Writing all this has certainly inspired me to start writing in my own commonplace book more often, and I hope that it might inspire you, as well! If you want to read (or hear) more about commonplacing from some of my favorite people online, here are a few links you can chase:

I think in our current culture, we as American’s are not always willing to admit when we need help with things, at least I see that in moms. We want to appear to have it all together and to be capable of caring for our families and other responsibilities on our own.

But this is not historically how mothers have done things. (The exception, perhaps, was in the extreme frontier days when pioneer women often went months without seeing their neighbors and had no contact with the families they left back east but occasional letters.)  In times gone by, women helped each other with childcare, household chores and outdoor work. They washed clothes together at the stream. They brought in the harvest and put up canned goods together. They trained their older daughters to look after the younger children while the women did work that needed free hands.

Sadly, we have lost this type of close community help as our lives have become more automated and fast-paced. We have the semblance of community online, but we lack real hands-on help in our daily lives. We would not say that our ancestors were weak in giving help to and taking help from other women in their communities, would we? No. I think, rather, we should say that it is strong and brave to admit that we sometimes need each other, that we need help. And we need to be used by God to help others also.